In April 2018 I ran “In the Footsteps of the Fallen” from Paris to London via the Western Front of the First World War. Starting in Paris on 8th April, I ran the Paris Marathon, before running back to London, following the line of the Western Front and visiting many of the major battlefields and memorial sites of World War One. I finished in London two weeks later by running the London Marathon on 22nd April.

I would like to thank the following organisations and businesses for their support:

The final route is likely to be around 360 miles, or running a marathon a day for 15 days. I will be running off road (other than the two organised marathons) and self-supported, carrying my own kit and camping for most overnight stops. 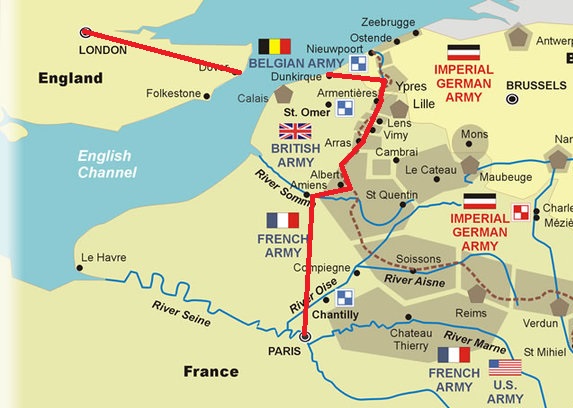 The red line shows the route of the run. After running the Paris Marathon, I will head north from Paris to Amiens, before following the line of the Western Front, visiting key sites such as Thiepval, Arras, Vimy Ridge, Loos, Messines Ridge and the Menin Gate in Ypres. After crossing the channel I will then run from Dover to London, ready to finish at the London Marathon on 22nd April.

“In the Footsteps of the Fallen” aims to raise a significant sum to support the wonderful work of ABF The Soldiers’ Charity, who provide lifelong support to soldiers, veterans and their families; a charity that as a former Army Officer is very close to my heart. 100 years on from the “War to end all Wars”, our Army continues to be active all over the world and The Soldiers’ Charity does an amazing job in helping both serving soldiers and veterans.

The chaos of moving across the Atlantic to Seattle has meant that 4 months has now passed since the Rebellion Ultra, but I still feel the need… END_OF_DOCUMENT_TOKEN_TO_BE_REPLACED

The inaugural edition of the Type 2 Fun Run caught my eye when it was launched earlier this year. With 30 hours to visit four mandatory checkpoints… END_OF_DOCUMENT_TOKEN_TO_BE_REPLACED

This isn’t a blog post I was planning to write… Back in May I was feeling great. I had just had my first ever marathon win (albeit… END_OF_DOCUMENT_TOKEN_TO_BE_REPLACED